Like everyone else, I have been pondering the recent Gulf oil spill with great concern and an eye to future consequences. Suffice it to say I am terrified, and although rationally I doubt a large-scale ecological disaster is on the horizon, I have been playing out the possibilities in my head just enough to keep me awake at night. As a sort of gateway to catharsis, I thought I might revisit  a list of memorable instances in literature with man-made disasters at their core– not as an exercise in taking advantage of living comfortably far away from direct effects of the crisis, but as a way to humbly bring things back into perspective.

The Lathe of Heaven
by Ursual K. LeGuin

The Lathe of Heaven is set in a post-apocalyptic (but still neighborhood-y) Portland after a vaguely defined war-to-end-all-wars occurs in the Middle East. Georg 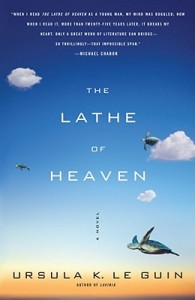 e Orr, the novel’s hero, is a likable drug addict who has the unexplained ability to change reality through his dreams. Made wise to this ability, the powers that be force Orr into therapy, where his psychiatrist begins manipulating him with utopian ends in mind. To nobody’s surprise, Orr’s dreams become a monkey’s paw, as each attempt to improve the state of the world leads to some increased state of disaster and woe. As is common with LeGuin, Taoist themes of balance and equanimity of alternating forces inform the novel, and an important theme as well is the danger of coercive therapy and the limits of positivism and utilitarian philosophy. One of the most persistent themes though is the disastrous implications of utopian aspiration, underscoring the points that the road to hell is paved with good intentions and that you should endeavor to work out your own problems before you start dictating another’s priorities.

On the Beach
by Nevil Shute

Many people are familiar with the esteemed Nevil Shute’s novel or, if not, perhaps with the fantastic movie. For those who are not I will give a very simple recap: after a nuclear war blights the Northern Hemisphere, a collection of Australians struggle to deal with life in a poisoned world. Eventually, they realize hope is futile as the currents of the ocean transport to fallout from the war towards the Southern Hemisphere. T

hen everyone dies. I will admit this novel is particularly close to my mind right now as I ponder the movement of the oil in to the Gulf Stream and the potential effects of contamination on the sea floor and in the clouds (given enough time).  Beyond being rather plainly-told speculation on the Cold War and its threat to humanity, I think that On the Beach is a novel that stresses the necessity of a properly magnanimous and long-term perspective on events. Sure, in some respects, that’s every novel on the theme of the Cold War, but On the Beach is, to my knowledge, the first book to explore the possibilities of nuclear fallout poisoning the entire world, and that being said, Shute is issuing a quiet indictment to the supreme nations of the Cold War era as divisive, narrow-minded powers who would as soon see the world die as they would accept the legitimacy of an opposing viewpoint. Another interesting aspect of On the Beach is that it imagines an apocalypse scenario not limited to America or Europe (or to a lesser extent Russia), and speaks to the concerns of the Global South at a time when the bottom half of the world garnered very little attention.

World Made By Hand
by James Howard Kunstler

The most recently-published book on this list, World Made by Hand imagines

the possible results of a Peak Oil crisis that leads to the near-total collapse of America and the rest of the world. So what does Kunstler (who writes extensively on the subject of Peak Oil) imagine the future will hold once the wells run dry? This future harkens strongly back to America’s past, being a world on par with about an 1820’s level of development, with attendant problems of scarcity, petty tyranny, disease and starvation, ignorance and decay of knowledge, and general hardscrabble struggling. The story is not particularly important (something about hope in hard times) and oftentimes it is implausible to expect that the end of oil equates to the end of modern society.  Still, it is a book worth considering, and a rather accessible look at a potential future that hinges solely on our degree of foresight vis-a-vis our oil dependence.

To counter World Made by Hand I offer you Kim Stanley Robinson’s The Wild Shore, which offers up perhaps the most unorthodox view of Orange County’s 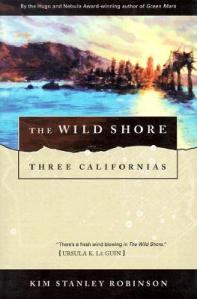 future ever put to paper (if you except a rather unfocused short story I wrote in college). Like in World, the characters in The Wild Shore live in a pastoral, technology-free world, though in this case the cause is nuclear war and it is soon made clear that the world is not uniformly composed of farmers and fishermen. It is important to note the way that this book deals with fundamental inequality and oppression as the result of disaster, with the residents of Orange County living under a sort of enforced Luddism. This is a theme explored time and again in disaster fiction, that given the threat of destruction people are just as likely to turn on one another and exploit their advantage to the detriment of others.  As the Bible says: ‘Where the corpse is, there the vultures will gather’ (Matthew 24:28).