In Which I Refer You to My Mechanic

I was at my mechanic Paul’s the other day waiting for my regular maintenance work to be completed when I noticed what I consider a rare phenomenon: Paul was mega-multi-tasking.  My friend Kay and I have often disussed our belief that women are more inclined and better able to multi-task than men.  I’m not referring to duo-tasking, talking on the phone while shopping, eating etc.–  anyone can do two things at once.  I’m talking about real three-or-four-things-going kind of tasking.

Women, I believe, since the dawn of time, have done more than one thing at a time.  One could almost picture the cave woman, preparing a meal, nursing a baby, watching the toddlers, and reaching over to paint on the wall all at the same time, while the man is focused on one important thing only – hunting the food.  It would be easy to understand why we might be genetically trained by our gender’s history.  At any rate, my simple observation through the years is that women can just “do” more all at one time than most men.

That’s what I was convinced of until I sat watching Paul that morning.  He was conversing with me, booking a ski vacation for his family on the computer, had one phone to his ear ordering a part, stopped to greet and sign in a new customer, and was also on hold on the speaker phone on line #2.  I sat in amazement.  He never got mixed up going from one conversation to another.  If interrupted by an employee and asked a question, he would turn back to the phone or me and pick up exactly where he was in the conversation.  It was like watching a conductor exept he was playing all of the instruments himself.

I love it when I get jarred out of my stereotypes and my goofy theories are proved to be just that, goofy.  Also I love 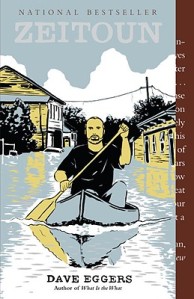 Paul.  He’s been my mechanic since 2000, he’s honest and excellent. I would change dentist, doctor, lawyer, accountant, and hair dresser before I would ever change mechanics.  He reminds me of the type of business man that Zeitoun was in Dave Eggers‘  non-fiction account following hurricane Katrina.  An honest man running his business with integrity and determination. It seems to me that the concept has virtually been reduced to laughing-matter these days, or at least is no longer taken as seriously as it once was because maybe a wide-spread cynicism has taken root . It’s possible to be sucessful and retain integrity. And, perhaps, the phenomenon that is a mega-multi-tasking man who manages to remain sweet and positive throughtout the day is due to nothing more than the very same integrity and determination– virtues which are not metaphors for anything else but just are what they are and happen to be more than enough to give a man the capacity for existing outside my aforementioned goofy stereotypes.

And if you want to find out how to reach my mechanic, come see me at the bookstore.

3 responses to “In Which I Refer You to My Mechanic”