Recently, an unyielding jar lid was complicating an already hassled situation.  I cried out to it “Help me out, dude!”  Didn’t think much about it until the other day while cleaning my back patio I accidentally whacked one of the chairs with the broom. “Oh, sorry dude!”.  Hmm.  No claim to fame for talking to inanimate objects, but what is it about dude?

You may never have bothered, but if you did actually look into dude you would find an avalanche, a tsunami, a veritable Mt. Everest of information and commentary. More than enough to possibly suck all the oxygen out of your interest. We can’t have that, so here’s my best distillation.  14th century dudde = “cloak, mantle”, of uncertain origin, probably a northern English dialect.  By 1560 plural duddes meant “ragged clothing”. By the 1800s, it had shrunk to duds (rags, ragged clothing) and a dudsman was a scarecrow. By 1897 its rag-tag scruffiness got it also associated with “counterfeit thing”, which by 1908 went as far as “useless, inefficient person or thing”, then to WWI’s dud “shell which fails to explode,” and thence to “expensive failure.”  We still use duds to mean “clothing” and dud to mean a failure.  And now for the even older Irish connection: Dúd in Old Irish (6th – 10th centuries)  means “dolt, numbskull, rubbernecker; a mopish, shy, foolish-looking fellow”, and by the 1600’s its diminutive form was “doddle, doodle”.

America, 1755. At the start of our War of Independence, British Army surgeon Dr. Richard Schuckburgh writes “Yankee Doodle Dandy”  mocking colonial soldiers with “doodle“, which in addition to dolts in rags might also be hinting at an 18th century slang term for “penis”.  Sticking a feather in your hat and calling it macaroni used another British slang term for a fop or dandy trying to affect European style. In short – limp, ragtag, foolish pretenders.  Once the colonists started to kick ass, they took over the tune as a patriotic prize and doodle/dood/dude began to spill over into casual use to 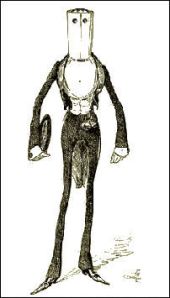 lampoon dandies and wannabes – limp, pretentiously-dressed losers.  Later waves of immigrants joined this developing party: German duden-pop (blockhead) made fun of fools, and Irish-Americans fired their venerable Dúd at slumming, wealthy, young swells. It took about 100 years for these ingredients to coagulate enough to “go viral” as we say now, which back in the day meant the newspapers got a hold of it. On February 25, 1883, the Brooklyn Eagle reported: “A new word has been coined. It is d-u-d-e or d-o-o-d. The spelling does not seem to be distinctly settled yet…Just where the word came from nobody knows, but it has sprung into popularity in the last two weeks, so that now everybody is using it…The dude is from 19 to 28 years of age, wears trousers of extreme tightness, is hollow chested, effeminate in his ways, apes the English and distinguishes himself among his fellowmen as a lover of actresses.”  So there you have it.  Dude was officially born.

Over the next few decades dude enjoyed casual employment continuing to poke fun at the excessively fashionable (males) and greenhorn wannabes (of either sex). The 1920’s enthusiasm for Way Out West added more juice: you could get all duded up with fancy hat and boots at a dude ranch for greenhorn tourists. And then!!…black ghetto slang took up dude in the 60’s and flipped it into a whole new universe – from beyond-the-pale dweeb to local Cool Guy!  Street corner homey dude quickly made his way into the hipster fringe of musicians, writers, and filmmakers.  “Of uncertain origin”

has been the refrain at every dude-ly shape-shift, and the next flew the same freak-flag.  Some uncertain year (late 60’s, early 70’s), some uncertain someones in some uncertain part of the then outlier Southern California surf subculture started using “dude” instead of “man”.  Homeboys, hipsters, artists, and now the romance of fringe athletes!  This cool new incarnation simmered another decade until 1982’s Fast Times at Ridgemont High added the final heat of “slacker”, and the brew exploded into the collective popular brainpan.  So there you have it.  Dude as we love it today!

Here are the footnotes.  Don’t let your eyes glaze over yet…I’m only giving

you the best fun stuff.  What makes dude so irresistibly useful?  The University of Pittsburgh’s linguist Scott F. Kiesling has written the definitive paper on the subject (spoiler alert: “cool solidarity”). Scholarly, so can’t avoid a touch of dryness…but quite neato!  Why has dude triumphed over every other similar word (“man”, for instance), and freely abandoned gender bias?…check out Muffy Siegel’s paper (another linguist) “Dude, Katie! Your Dress is so Cute!” Skip down below item #10 to get directly to where the flavor really starts…do the whole thing if you like this taste. At the other end of the spectrum: if you must seek ordination as a dude minister then go directly to The Church of the Latter Day Dude.

Now for my own personal two cents. I love stem-cell-ish words like “dude”, words that manage to blow out their customary jambs and start to refer to

almost anything – see my previous etymological trysts with “so“, “guy“, and “stuff“.  I take these free-love inventions of the human mind as an optimistic reminder that the bullying mean side of our natures is indeed naturally countered by a playful, sweet All-is-One side. Not so fond of the often saccharine New Age lingo, though.  Much prefer to give it up to the in-dwelling spirit of my patio furniture in the form of “thanks, dude!”.  Might remain mostly an American free-love expression,

though…likely never attaining the world-wide employment that “guy” is achieving.  Most parts of the world prefer hierarchy to quite such indiscriminate camaraderie.  In my India ashram days, I remember the house staff being rather insulted by our democratic discomfort at being addressed with what we saw as the colonial “sahib” and “mem-sahib” and our resulting attempts to get them to use first names.  They did not want to be tossed into some vague mosh-pit of cool solidarity. They worked hard at their jobs and wanted the respect of formality.  Dude may be for everyone (and everything), but everyone may not be ripe for Dude.

P.S.  Alright, people!  Everyone in Southern California is a mere 2 degrees of separation from a surfer.  You know someone who knows someone who was a little surf-grom in the 70’s (’70’s, remember…waaay before Spicoli!).  Find them.  Ask them when they first heard or used “dude”. My sources are the Mickey Dora-era Malibu crew and they say they didn’t use dude, they called each other “man”.  They think “dude” came from Valley surfers.  Maybe.  But we have yet to hear from San Diego, San Clemente, Huntington/Manhattan, Rincon, or Valley surfers themselves.  The front row seats at dude’s most recent quantum leap could be at your very fingertips. Lurk no more…comment here with the fruits of your sleuthing on the surf-roots of Dude. 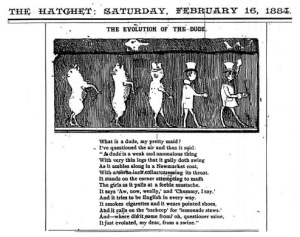 Etymological illuminations brought to you by Jane, our very own sweet Dude

2 responses to “Dude, this one’s gonna blow your mind!”