The Staff Picks: Week of May 2nd

Recently, someone had the audacity to call us the “best curated bookstore” in Los Angeles. We’re not sure we can take this kind of libel sitting down.

So, we’re going to get back up and tell you what books, if you were to walk into our store this week, we’d rush over and tuck under your arm, stage-whispering fervent promises about.

We might even make a weekly habit of this, quickly compiling a reading list on which anyone on the planet would be able to find something they’d love. Because although there is only a handful of us, we are  zealots about the books we love and deviants in our tastes.

The agents at the IRS Regional Examination Center in Peoria, Illinois, appear ordinary enough to newly arrived trainee David Wallace. But as he immerses himself in a routine so tedious and repetitive that new employees receive boredom-survival training, he learns of the extraordinary variety of personalities drawn to this strange calling. And he has arrived at a moment when forces within the IRS are plotting to eliminate even what little humanity and dignity the work still has.

The Pale King remained unfinished at the time of David Foster Wallace’s death, but it is a deeply compelling and satisfying novel, hilarious and fearless and as original as anything Wallace ever undertook. It grapples directly with ultimate questions–questions of life’s meaning and of the value of work and society–through characters imagined with the interior force and generosity that were Wallace’s unique gifts. Along the way it suggests a new idea of heroism and commands infinite respect for one of the most daring writers of our time.

Tracy Waterhouse leads a quiet, ordered life as a retired police detective-a life that takes a surprising turn when she encounters Kelly Cross, a habitual offender, dragging a young child through town. Both appear miserable and better off without each other-or so decides Tracy, in a snap decision that surprises herself as much as Kelly. Suddenly burdened with a small child, Tracy soon learns her parental inexperience is actually the least of her problems, as much larger ones loom for her and her young charge.
Meanwhile, Jackson Brodie, the beloved detective of novels such as Case Histories, is embarking on a different sort of rescue-that of an abused dog. Dog in tow, Jackson is about to learn, along with Tracy, that no good deed goes unpunished. 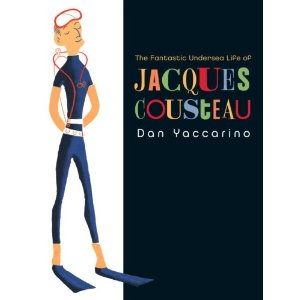 The Fantastic Undersea Life of Jacques Cousteau, by Dan Yaccarino

Jacques Cousteau was the world’s ambassador of the oceans. His popular TV series brought whales, otters, and dolphins right into people’s living rooms. Now, in this exciting picturebook biography, Dan Yaccarino introduces young readers to the man behind the snorkel. From the first moment he got a glimpse of what lived under the ocean’s waves, Cousteau was hooked. And so he set sail aboard the Calypso to see the sea. He and his team of scientists invented diving equipment and waterproof cameras. They made films and televisions shows and wrote books so they could share what they learned. The oceans were a vast unexplored world, and Cousteau became our guide. And when he saw that pollution was taking its toll on the seas, Cousteau became our guide in how to protect the oceans as well.

Say Her Name, by Francisco Goldman

In 2005, novelist Franciso Goldman married a beautiful young writer named Aura Estrada in a romantic Mexican hacienda. The month before their second anniversary, Aura broke her neck while body surfing. Francisco, blamed for Aura’s death by her family and blaming himself, wanted to die, too. Instead, he wrote “Say Her Name,” a novel chronicling his great love and unspeakable loss.
*
A word from Aida about this being a “novel”: It’s not. At least, not a novel as it’s commonly thought of. This is one of the very small handful of books I can name written in the flushed throes of fresh grief. It isn’t a memoir written in retrospect, I mean. It is,  rather, the thoughts and recollections of a man who cannot yet say, “this is what happened and this is how I got through it.” There is no “The End” and though Goldman does wrap it up at the end of the book, this is simply a transparent and long journal entry. Whether it should have been published is a moot point, of course, (though I wouldn’t have,) but it is an absorbing book, which does little more than to tell us what it was like. That’s all. It doesn’t try to make sense. For this reason, it’s unique.
***
Jane Picks:

Born to Run, by Christopher McDougall
Isolated by the most savage terrain in North America, the reclusive Tarahumara Indians of Mexico’s deadly Copper Canyons are custodians of a lost art. For centuries they have practiced techniques that allow them to run hundreds of miles without rest and chase down anything from a deer to an Olympic marathoner while enjoying every mile of it. Their superhuman talent is matched by uncanny health and serenity, leaving the Tarahumara immune to the diseases and strife that plague modern existence. With the help of Caballo Blanco, a mysterious loner who lives among the tribe, the author was able not only to uncover the secrets of the Tarahumara but also to find his own inner ultra-athlete, as he trained for the challenge of a lifetime: a fifty-mile race through the heart of Tarahumara country pitting the tribe against an odd band of Americans, including a star ultramarathoner, a beautiful young surfer, and a barefoot wonder.
Full of incredible characters, amazing athletic achievements, cutting-edge science, and, most of all, pure inspiration, Born to Run is an epic adventure that began with one simple question: Why does my foot hurt? In search of an answer, Christopher McDougall sets off to find a tribe of the world’s greatest distance runners and learn their secrets, and in the process shows us that everything we thought we knew about running is wrong.
***
Frank, Jr. Picks:

Unfamiliar Fishes, by Sarah Vowell
Many think of 1776 as the defining year of American history, when we became a nation devoted to the pursuit of happiness through self- government. In Unfamiliar Fishes, Sarah Vowell argues that 1898 might be a year just as defining, when, in an orgy of imperialism, the United States annexed Hawaii, Puerto Rico, and Guam, and invaded first Cuba, then the Philippines, becoming an international superpower practically overnight.
With her trademark smart-alecky insights and reporting, Vowell lights out to discover the off, emblematic, and exceptional history of the fiftieth state, and in so doing finds America, warts and all.
***
Lucia Picks:

The Great Night, by Chris Adrian

On Midsummer Eve 2008, three people, each on the run from a failed relationship, become trapped in San Francisco’s Buena Vista Park, the secret home of Titania, Oberon, and their court. On this night, something awful is happening in the faerie kingdom: in a fit of sadness over the end of her marriage, which broke up in the wake of the death of her adopted son, Titania has set loose an ancient menace, and the chaos that ensues will threaten the lives of immortals and mortals alike.
***
Julie Picks: 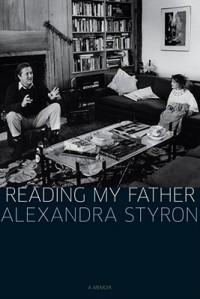 Reading My Father, by Alexandra Styron
In Reading My Father, William Styron’s youngest child explores the life of a fascinating and difficult man whose own memoir, Darkness Visible, so searingly chronicled his battle with major depression. Alexandra Styron’s parents—the Pulitzer Prize–winning author of Sophie’s Choice and his political activist wife, Rose—were, for half a century, leading players on the world’s cultural stage. Alexandra was raised under both the halo of her father’s brilliance and the long shadow of his troubled mind.

Reading My Father portrays the epic sweep of an American artist’s life, offering a ringside seat on a great literary generation’s friendships and their dramas. It is also a tale of filial love, beautifully written, with humor, compassion, and grace.

Here is the story of Jerry Weintraub: the self-made, Brooklyn-born, Bronx-raised impresario, Hollywood producer, legendary deal maker, and friend of politicians and stars. No matter where nature has placed him–the club rooms of Brooklyn, the Mafia dives of New York’s Lower East Side, the wilds of Alaska, or the hills of Hollywood–he has found a way to put on a show and sell tickets at the door. “All life was a theater and I wanted to put it up on a stage,” he writes. “I wanted to set the world under a marquee that read: ‘Jerry Weintraub Presents.'”

Half Empty, by David Rakoff

In this deeply funny (and, no kidding, wise and poignant) book, Rakoff examines the realities of our sunny,  gosh­ everyone-can-be-a-star contemporary culture and finds that, pretty much as a universal rule, the best is not yet to come, adversity will triumph, justice will not be served, and your dreams won’t come true.

The book ranges from the personal to the universal, combining stories from Rakoff’s reporting and accounts of his own experi­ences: the moment when being a tiny child no longer meant adults found him charming but instead meant other children found him a fun target; the perfect late evening in Manhattan when he was young and the city seemed to brim with such pos­sibility that the street shimmered in the moonlight—as he drew closer he realized the streets actually flickered with rats in a feeding frenzy. He also weaves in his usual brand Oscar Wilde–worthy cultural criticism (the tragedy of Hollywood’s Walk of Fame, for instance).

As you can see, what we pick won’t necessarily be new or old or funny or serious or long or short. They’re just good books that excite us and what’s a friendly bookstore for but to share all the excitement…

One response to “The Staff Picks: Week of May 2nd”