We hope Dad loved all the books you gave him yesterday for his special day.

Here’s what’s got us talking this week.

Your Voice in My Head, by Emma Forrest

Emma Forrest, a British journalist, was just twenty-two and living the fast life in New York City when she realized that her quirks had gone beyond eccentricity. 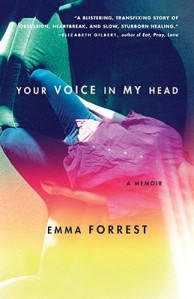 In a cycle of loneliness, damaging relationships, and destructive behavior, she found herself in the chair of a slim, balding, and effortlessly optimistic psychiatrist—a man whose wisdom and humanity would wrench her from the dangerous tide after she tried to end her life. She was on the brink of drowning, but she was still working, still exploring, still writing, and she had also fallen deeply in love. One day, when Emma called to make an appointment with her psychiatrist, she found no one there. He had died, shockingly, at the age of fifty-three, leaving behind a young family. Reeling from the premature death of a man who had become her anchor after she turned up on his doorstep, she was adrift. And when her all-consuming romantic relationship also fell apart, Emma was forced to cling to the page for survival and regain her footing on her own terms.

Along a Long Road, by Frank Viva 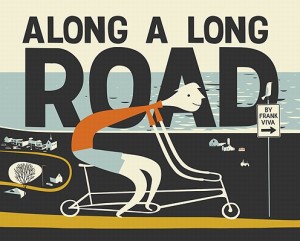 Follow that road!
Speed off on an eventful bicycle ride along the bold yellow road that cuts through town, by the sea, and through the country. Ride up and around, along and through, out and down.
Frank’s striking graphic style is executed in just five joyous colors, and his spare, rhythmic language is infectious.
Hit a bump?
Get back on track!
Reach the end?
Start again!

The Dog Who Came in From the Cold, by Alexander McCall Smith

the comings and goings of the wonderfully motley crew of residents continue apace. A pair of New Age operators has determined that Terence Moongrove’s estate is the cosmologically correct place for their center for cosmological studies. Literary agent Barbara Ragg has decided to represent Autobiography of a Yeti, purportedly dictated to the author by the Abominable Snowman himself. And our small, furry, endlessly surprising canine hero Freddie de la Hay—belonging to failed oenophile William French—has been recruited by MI6 to infiltrate a Russian spy ring. Needless to say, the other denizens of Corduroy Mansions have issues of their own. But all of them will be addressed with the wit and insight into the foibles of the human condition that have become the hallmark of this peerless storyteller.

The Spirit Catches You and You Fall Down, by Anne Fadiman

When three-month-old Lia Lee Arrived at the county hospital emergency room in Merced, California, a chain of events was set in motion from which neither she nor her parents nor her doctors would ever recover. Lia’s parents, Foua and Nao Kao, were part of a large Hmong community in Merced, refugees from the 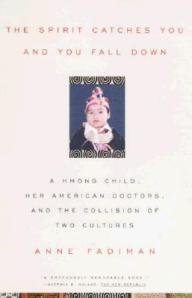 CIA-run “Quiet War” in Laos. The Hmong, traditionally a close-knit and fiercely people, have been less amenable to assimilation than most immigrants, adhering steadfastly to the rituals and beliefs of their ancestors. Lia’s pediatricians, Neil Ernst and his wife, Peggy Philip, cleaved just as strongly to another tradition: that of Western medicine. When Lia Lee Entered the American medical system, diagnosed as an epileptic, her story became a tragic case history of cultural miscommunication.

Parents and doctors both wanted the best for Lia, but their ideas about the causes of her illness and its treatment could hardly have been more different. The Hmong see illness aand healing as spiritual matters linked to virtually everything in the universe, while medical community marks a division between body and soul, and concerns itself almost exclusively with the former. Lia’s doctors ascribed her seizures to the misfiring of her cerebral neurons; her parents called her illness, qaug dab peg–the spirit catches you and you fall down–and ascribed it to the wandering of her soul. The doctors prescribed anticonvulsants; her parents preferred animal sacrifices.

Nerd Do Well: A Small Boy’s Journey to Becoming a Big Kid, by Simon Pegg

The unique life story of one of the most talented and inventive comedians, star of Shaun of the Dead, Hot Fuzz, and Star Trek.

Zombies in North London, death cults in the West Country, the engineering deck of the Enterprise: actor, comedian, writer and self-proclaimed supergeek Simon Pegg has been ploughing some bizarre furrows in recent times. Having landed on the U.S. movie scene in the surprise cult hit Shaun of the Dead, his enduring appeal and rise to movie star with a dedicated following has been mercurial, meteoric, megatronic, but mostly just plain great. From his childhood (and subsequently adult) obsession with science fiction, his enduring friendship with Nick Frost, and his forays into stand-up comedy which began with his regular Monday morning slot in front of his twelve-year-old classmates, Simon has always had a severe and dangerous case of the funnies. Whether recounting his experience working as a lifeguard at the city pool, going to Comic-Con for the first time and confessing to Carrie Fisher that he used to kiss her picture every night before he went to sleep, or meeting and working with heroes that include Peter Jackson, Kevin Smith, and Quentin Tarantino, Pegg offers a hilarious look at the journey to becoming an international superstar, dotted with a cast of memorable characters, and you’re rooting for him all the way.

Seconds Out, by Martin Kohan 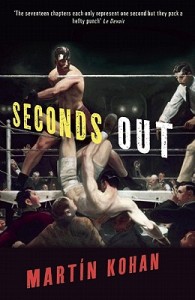 New York, 1923: the Argentine boxer Luis Angel Firpo knocks out of the ring Jack Dempsey, heavyweight champion of the world. Dempsey is out of the ring for seventeen seconds, but is allowed by the US referee to get back in. In the second round, Dempsey knocks Firpo out. Seconds Out is a powerful reflection on memory and national identity.