It is the spring of 2002 and a perfect storm has hit Boston. Across the city’s archdiocese, trusted priests have been accused of the worst possible betrayal of the

souls in their care. In Faith, Jennifer Haigh explores the fallout for one devout family, the McGanns.Estranged for years from her difficult and demanding relatives, Sheila McGann has remained close to her older brother Art, the popular, dynamic pastor of a large suburban parish. When Art finds himself at thecenter of the maelstrom, Sheila returns to Boston, ready to fight for him and his reputation. What she discovers is more complicated than she imagined. Her strict, lace-curtain-Irish mother is living in a state of angry denial. Sheila’s younger brother Mike, to her horror, has already convicted his brother in his heart. But most disturbing of all is Art himself, who persistently dodges Sheila’s questions and refuses to defend himself.

As the scandal forces long-buried secrets to surface, Faith explores the corrosive consequences of one family’s history of silence—and the resilience its members ultimately find in forgiveness. Throughout, Haigh demonstrates how the truth can shatter our deepest beliefs—and restore them. A gripping, suspenseful tale of one woman’s quest for the truth, Faith is a haunting meditation on loyalty and family, doubt and belief. Elegantly crafted, sharply observed, this is Jennifer Haigh’s most ambitious novel to date.

BJ gave this to everyone for Christmas and still hasn’t stopped talking about:

The Wonderful Future that Never Was, by Gregory Benford and the editors of Popular Mechanics 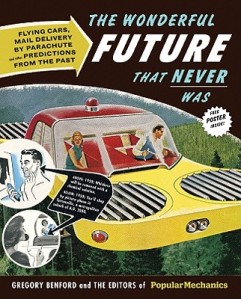 Between 1903 and 1969, scientists and other experts made hundreds of predictions in Popular Mechanics magazine about what the future would hold. Their forecasts ranged from ruefully funny to eerily prescient and optimistically utopian. Here are the very best of them, culled from hundreds of articles, complete with the original, visually stunning retro art. They will capture the imagination of futurists in the same way Jules Verne’s writing did a century earlier. Every chapter features an introduction by astrophysics professor, science-fiction author, and former NASA advisor Gregory Benford.
PAST PREDICTIONS OF OUR FUTURE INCLUDE:
Skyscrapers so tall they’ll have their own climate  o  Underground pneumatic tubes to replace garbage trucks  o  Rooftop lakes that serve as air conditioning systems  o  Clothes made from asbestos and aluminum  o  Mail sorted by robots and delivered by parachutes

Lucia prefers this to this:

The Waste Land and Other Writings, by T.S. Elliot

First published in 1922, “The Waste Land” is T.S. Eliot’s masterpiece, and is not only one of the key works of modernism but also one of the greatest poetic

achievements of the twentieth century. A richly allusive pilgrimage of spiritual and psychological torment and redemption, Eliot’s poem exerted a revolutionary influence on his contemporaries, summoning forth a rich new poetic language, breaking decisively with Romantic and Victorian poetic traditions. Kenneth Rexroth was not alone in calling Eliot “the representative poet of the time, for the same reason that Shakespeare and Pope were of theirs. He articulated the mind of an epoch in words that seemed its most natural expression.”

As influential as his verse, T.S. Eliot’s criticism also exerted a transformative effect on twentieth-century letter, and this new edition of The Waste Land and Other Writings includes a selection of Eliot’s most important essays.

In her new Introduction, Mary Karr dispels some of the myths of the great poem’s inaccessibility and sheds fresh light on the ways in which “The Waste Land” illuminates contemporary experience.

Jane would like you to avoid being negatively influenced by the hype, and read:

On a May afternoon in 1943, an Army Air Forces bomber crashed into the

Pacific Ocean and disappeared, leaving only a spray of debris and a slick of oil, gasoline, and blood.  Then, on the ocean surface, a face appeared.  It was that of a young lieutenant, the plane’s bombardier, who was struggling to a life raft and pulling himself aboard.  So began one of the most extraordinary odysseys of the Second World War.

The lieutenant’s name was Louis Zamperini.  In boyhood, he’d been a cunning and incorrigible delinquent, breaking into houses, brawling, and fleeing his home to ride the rails.  As a teenager, he had channeled his defiance into running, discovering a prodigious talent that had carried him to the Berlin Olympics and within sight of the four-minute mile.  But when war had come, the athlete had become an airman, embarking on a journey that led to his doomed flight, a tiny raft, and a drift into the unknown.

Ahead of Zamperini lay thousands of miles of open ocean, leaping sharks, a foundering raft, thirst and starvation, enemy aircraft, and, beyond, a trial even greater.  Driven to the limits of endurance, Zamperini would answer desperation with ingenuity; suffering with hope, resolve, and humor; brutality with rebellion.  His fate, whether triumph or tragedy, would be suspended on the fraying wire of his will.

In her long-awaited new book, Laura Hillenbrand writes with the same rich and vivid narrative voice she displayed in Seabiscuit.  Telling an unforgettable story of a man’s journey into extremity, Unbroken is a testament to the resilience of the human mind, body, and spirit.

The Widower’s Tale, by Julia Glass

In a historic farmhouse outside Boston, seventy-year-old Percy Darling is settling happily into retirement: reading novels, watching old movies, and swimming naked in his pond. His routines are disrupted, however, when he is persuaded to let a locally beloved preschool take over his barn. As Percy sees his rural refuge overrun by children, parents, and teachers, he must reexamine the solitary life he has made in the three decades since the sudden death of his

wife. No longer can he remain aloof from his community, his two grown daughters, or, to his shock, the precarious joy of falling in love.

One relationship Percy treasures is the bond with his oldest grandchild, Robert, a premed student at Harvard. Robert has long assumed he will follow in the footsteps of his mother, a prominent physician, but he begins to question his ambitions when confronted by a charismatic roommate who preaches—and begins to practice—an extreme form of ecological activism, targeting Boston’s most affluent suburbs.

Meanwhile, two other men become fatefully involved with Percy and Robert: Ira, a gay teacher at the preschool, and Celestino, a Guatemalan gardener who works for Percy’s neighbor, each one striving to overcome a sense of personal exile. Choices made by all four men, as well as by the women around them, collide forcefully on one lovely spring evening, upending everyone’s lives, but none more radically than Percy’s.

With equal parts affection and satire, Julia Glass spins a captivating tale about the loyalties, rivalries, and secrets of a very particular family. Yet again, she plumbs the human heart brilliantly, dramatically, and movingly.

One response to “Staff Picks: Week of June 27th”