Staff Picks: Week of the 4th of July

The Wild Life of Our Bodies, by Rob Dunn

A biologist shows the influence of wild species on our well-being and the world and how nature still clings to us—and always will.

We evolved in a wilderness of parasites, mutualists, and pathogens, but we no longer see ourselves as being part of nature and the broader community of life.

In the name of progress and clean living, we scrub much of nature off our bodies and try to remove whole kinds of life—parasites, bacteria, mutualists, and predators—to allow ourselves to live free of wild danger. Nature, in this new world, is the landscape outside, a kind of living painting that is pleasant to contemplate but nice to have escaped.

The truth, though, according to biologist Rob Dunn, is that while “clean living” has benefited us in some ways, it has also made us sicker in others. We are trapped in bodies that evolved to deal with the dependable presence of hundreds of other species. As Dunn reveals, our modern disconnect from the web of life has resulted in unprecedented effects that immunologists, evolutionary biologists, psychologists, and other scientists are only beginning to understand. Diabetes, autism, allergies, many anxiety disorders, autoimmune diseases, and even tooth, jaw, and vision problems are increasingly plaguing bodies that have been removed from the ecological context in which they existed for millennia.

In this eye-opening, thoroughly researched, and well-reasoned book, Dunn considers the crossroads at which we find ourselves. Through the stories of visionaries, Dunn argues that we can create a richer nature, one in which we choose to surround ourselves with species that benefit us, not just those that, despite us, survive.

The Astral, by Kate Christensen

The Astral is a huge rose-colored old pile of an apart­ment building in the gentrifying neighborhood of Greenpoint, Brooklyn. For decades it was the happy home (or so he thought) of the poet Harry Quirk and his wife, Luz, a nurse, and of

their two children: Karina, now a fer­vent freegan, and Hector, now in the clutches of a cultish Christian community. But Luz has found (and destroyed) some poems of Harry’s that ignite her long-simmering sus­picions of infidelity, and he’s been summarily kicked out. He now has to reckon with the consequence of his literary, marital, financial, and parental failures (and perhaps oth­ers) and find his way forward—and back into Luz’s good graces.

Harry Quirk is, in short, a loser, living small and low in the water. But touched by Kate Christensen’s novelistic grace and acute perception, his floundering attempts to reach higher ground and forge a new life for himself become funny, bittersweet, and terrifically moving. She knows what secrets lurk in the hearts of men—and she turns them into literary art of the highest order.

Charlie Joe Jackson’s Guide to Not Reading, by Tommy Greenwald

Charlie Joe Jackson may be the most reluctant reader ever born. And so far, he’s managed to get through life without ever reading an entire book from cover to cover. But now that he’s in middle school, avoiding reading isn’t as easy as it used to be. And when his friend Timmy McGibney decides that he’s tired of covering for him, Charlie Joe finds himself resorting to desperate measures to keep his perfect record intact.This is the hilarious story of an avid non-reader and the extreme lengths to which he’ll go to get out of reading a book.

You Lost Me There, by Rosecrans Baldwin

By turns funny, charming, and tragic, Rosecrans Baldwin’s debut novel takes us inside the heart and mind of Dr. Victor Aaron, a leading Alzheimer’s researcher at the Soborg Institute on Mount Desert Island in Maine. Victor spends his days alternating between long hours in the sterile lab and running through memories

of his late wife, Sara. He has preserved their marriage as a sort of perfect, if tumultuous, duet between two opposite but precisely compatible souls.

But one day, in the midst of organizing his already hyperorganized life, Victor discovers a series of index cards covered in Sara’s handwriting. They chronicle the major “changes in direction” of their marriage, written as part of a brief fling with couples counseling. Sara’s version of their great love story is markedly different from his own, which, for the eminent memory specialist, is a startling revelation. Victor is forced to reevaluate and relive each moment of their marriage, never knowing is the revisions will hurt or hearten. Meanwhile, as Victor’s faith in memory itself unravels, so too does his precisely balanced support network, a group of strong women-from his lab assistant to Aunt Betsy, doddering doyenne of the island-that had, so far, allowed him to avoid grieving.

Rosecrans Baldwin shows himself here to be a young writer bursting with talent and imagination who deftly handles this aching love story with sensitivity and unexpected maturity. You Lost Me Thereis a treasure of a book filled with beautiful, intelligent prose, a book that wears its smarts lightly and probes its emotions deeply.

Aida Picks:
When Marlana Pulled a Thread, by Dave Eggers 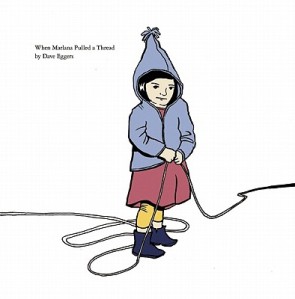 Marlana is a girl who one day sees a strange-looking thread amid the grass and flowers, and she pulls it. Pop! Whistle! As Marlana pulls, the thread keeps coming. Soon, things begin to disappear: first a tree, then a palace, then a whole town. Marlana wonders if she ought to stop pulling, but she’s no quitter….
The first picture book written and drawn by bestselling author Dave Eggers, “When Marlana Pulled a Thread” is a classic story that will delight and disarm readers, leaving them with that special itch to go back to the beginning, read it all again, and attempt to get to the bottom of things.
The dustjacket unfolds into a large poster, revealing hidden drawings and secret messages. 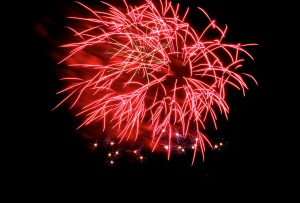