“Everything is blooming most recklessly; if it were voices instead of colors, there would be an unbelievable shrieking into the heart of the night.”

May was my month. A stolen month because it wasn’t meant to be mine. August was meant to be my month. But I was born three months early, which suited me just fine. May was when the daffodils appeared and the Hawthorne trees bloomed. My middle name was Hawthorne. Jewell Hawthorne. It was fairly obvious to me, therefore, that the white 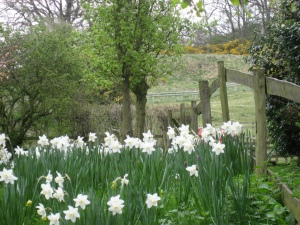 blossoms that covered the trees all around Sunny Hill Farm were meant for me, were mine only, were mine alone. So when the page on the miniature calendar that dangled from a string at our kitchen window was torn off  and the month of May appeared in all its splendor, my heart skipped more happily than during any other month of the year.

By the age of nine I had figured out that making my own birthday plans was the thing to do. And so, the tradition of inviting my best friends Sally, Sydney and Christy over for a three-day sleep-out began. Starting on the first day of spring we would sit together mornings and afternoons on the school train and, as the old cars shook their way up and

down The Main Line of  tracks that reached from Paoli to Philadelphia, we curled up on the velvet seats, our uniform blazers and canvas book bags thrown aside, and made lists of what we would need and things we would do.

My birthday event would begin on a Friday afternoon in the middle of the month, come rain or shine, and run through to Sunday afternoon. The first thing we would do was set up my parents’ old canvas tent far from the house in the back pasture up on the hill and under a blossoming Hawthorne that overlooked the muddy pond below. We had ice chests filled with eggs, bacon and liverwurst, a cast iron frying pan for cooking, and a wood crate to protect our loaves of bread and bags of potato chips from the raccoons, possums and foxes that came our way in the dark of the night. Cans of Dinny More stew were stacked for our dinners and, of course, there were sweet, gooey Twinkies with candles for the day itself. Our four ponies tethered nearby, we had only to reach out to touch their soft doughy noses whenever we felt like it.

Each day we woke up with the sun and every night we lay flat like pancakes under the stars and talked about our wild dreams. In between, we went for long rides on our ponies, starting out on the old dirt road behind the farm and then climbing up the hills to the forest above, where we raced along the winding paths, jumping fallen branches that blocked our way. Nothing held us back. We were brave as thieves stealing time not intended to be ours. We had school exams coming up, all kinds of weekend commitments like dance classes, pony club, lessons of all kinds that we had skipped out on. We were kings, the special ones. We owned it all up there in the forest, secluded from the rest of the world. We would scream out nonsense words like Rah rah racker rah and guttersnipeat at the top of our lungs as we galloped along, avoiding low-hung branches by wrapping ourselves flat against our ponies’ necks.

through the treetops and found us, we would slide from our ponies, exhausted, and spread ourselves out in the sun, outstretched hands touching hands so that we were all connected, and fall asleep. We went for late night swims in the muddy pond, tripping down the hill from our tent, naked as jaybirds, and canonballing in. We would emerge shivering and shaking with the hairs on our legs and arms standing straight up like sharp pins and then we rolled ourselves dry in the pasture grass and huddled together into a single figure, our breathing soft and kind, our hearts beating like soft drums in the still of the night.

April showers, then May flowers. May was my month. It was in the month of May that tenderness and a deep longing first entered my life.

–excerpt from work in progress tentatively titled, An Unexpected Life

Spring is one of the four most wonderful seasons of the year. We love it as much as Summer, Fall and Winter here at Portrait, and we invite you to celebrate it with us as we share the art and literature that encapsulate what spring means to each of us. What whispers “Spring” to you?