[Unrelated Note: Last week’s (A)Musings are up. Go take a look and complete this week’s thought.]

Years ago, when I was living in New York City, a friend told me how celebrities, even minor ones (actors most especially,) hated to be acknowledged in public. She went on to explain that they wanted freedom to be themselves and interact with waiters, store clerks, etc., without having to smile through a fountain of gushing compliments. I understood her point of view and believed her, since she was a working actor herself.  On the other hand, putting myself in the celebrity’s place, I often wonder if maybe they do want to be told, even by a complete stranger, that they are admired, and their work appreciated. Isn’t that part of the bargain, to be acknowledged publicly for performing well for the public?

When I first moved to NYC from the south in 1969, the film Midnight Cowboy had just come out. On my way to a business meeting one day with a colleague, who was a seasoned and sophisticated New Yorker, I spotted Jon Voight in a cowboy hat and boots walking toward us, just as he had walked the streets of New York in the film. I couldn’t help myself. I loudly blurted out, “It’s the Midnight Cowboy!” He smiled and tipped his hat and kept on walking. In the meantime, my colleague had crossed the street to avoid the embarrassment of being seen with me. She said, as I rushed to catch up to her, “If you ever do that again I will have you fired!”  “What did I do wrong?” I asked not really understanding. “You made a spectacle of yourself over a movie star!” she exclaimed.  “You’re never, never supposed to act like you know who they are!”  Really? I was skeptical then and remain so now. I mean, I wouldn’t hound someone for an autograph, or try to elbow the paparazzi out of the way to get to him. Nor would I stalk or grovel or scream in ecstasy, but I would like to feel free to smile in acknowledgement, maybe tip my head in their direction, without being made to feel like a yokel by my urban friends. 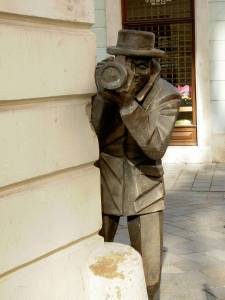 I moved to Los Angeles eleven years ago and one of the things I love about this city is …well… the liveliness. The excitement that comes from never quite knowing who or what you’ll see next. It is never hum drum, always unpredictable. And for me part of the fun of the unpredictability is suddenly seeing the faces in restaurants, stores, and other public places, that you have recently watched on the big and little screens.

We get our share of celebrities here at the bookstore, as do most retail places in Los Angeles. The thing that puzzles me is how awkward it is sometimes.  Often, if they are young television actors, I don’t know who they are anyway, so no problem for me. And sometimes even if I don’t know who they are or haven’t seen their show, they somehow exude an aura of being special, as if there’s a light on somewhere inside them, beckoning the world to notice. Then it’s easy; I just treat them like the nice customers that they are.

On the other hand, we also have well-known celebrities wandering in– ones who I not only recognize but whose work I also have a genuine admiration for. Now they are standing at the counter in front of me ready to make a purchase. This is when it gets sticky. They know that I know who they are, and yes they are just folks like us, but still.  It is so tempting to mention how wonderful they were in this or that role, but I don’t want to be presumptuous or make them uncomfortable by drawing attention to their celebrity.  I wonder how they feel.  Do they want to be treated like ordinary customers?  Do they prefer not to be acknowledged?  Do I joke with them as I would anyone else? Of course I do. Do I?

Filed under Excuse me. I have a Question.

Tagged as celebrities in bookstores, fandom