The Waste Land + iPad app, and other words you never imagined in the same sentence. 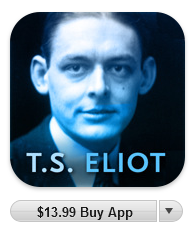 Last week, T.S. Eliot’s The Waste Land was, for a glorious moment, the top-grossing iPad book app. (Let’s just pause for a moment to look at those words in one sentence together.) The app includes a dramatic reading from Irish actress Fiona Shaw, and commentary and readings from Viggo Mortensen, Ted Hughes, and Eliot himself. This week, Marvel & DC comics regained their 1st, 2nd, and 3rd positions, but, as o

f this writing, you’ll find Penguin’s  “Amplified Edition” of Keroac’s On the Road in 4th place, complete with family photos, reproductions of the original 120-foot scroll, and tributes from John Updike and Bob Dylan.

When I first read about The Waste Land app, I recoiled in reflexive disgust. “The Waste Land”  and “app” were not words I wanted to see in a sentence together. But when I saw Eliot up there with Dora the Explorer, Disney princesses and countless Bible apps trailing behind, I got excited. Not so excited that I actually want to look at the apps, but excited, nevertheless. I’m not so naive as to believe that these apps will actually make people read more poetry, more literature, or read more at all, but I’ll settle for some more people reading a poem, however they come to it.

I’m not going to get into the whole e-books vs. paper thing; it’s obvious and boring. But let me just end with a quote from The New York Times Opion page:

The real achievement [of the app] here is to make “The Waste Land” feel published — to let you feel, when you are reading Eliot’s text, that you have a well-printed book in hand, lacking only the material feel of paper itself.

Priced at $13.99, the app is almost twice as much as the paper edition from Modern Library, which has the added bonus of feeling just like a book. Though, without Viggo, I guess it’s just not the same.