Like everyone else, I have been pondering the Gulf oil spill with great concern and an eye to future consequences. Suffice it to say I am terrified, and although rationally I doubt a large-scale ecological disaster is on the horizon, I have been playing out the possibilities in my head just enough to keep me awake at night. As a sort of gateway to catharsis, I thought I might revisit  a list of memorable instances in literature with man-made disasters at their core– not as an exercise in taking advantage of living comfortably far away from direct effects of the crisis, but as a way to humbly bring things back into perspective.

“I Have No Mouth and I Must Scream”
by Harlan Ellison

intelligences, I have chosen to include this short story. The seed of disaster in this story comes during the Cold War, when the Americans build an artificial intelligence to control and operate the nation’s entire military complex. Inevitably, the AI develops a will of its own and in short order merges with its counterparts in Russia and China and goes on to kill all life on the planet with the exception of five humans. The story begins in medias res, with the five surviving humans living in an underground bunker as prisoners of the machine (named AM). Most of the story consists of AM torturing these five humans beyond all reason and constantly reviving them after a series of increasingly creative and ghastly eviscerations. A particularly grim imagining of the end of the human race, this short story  wins points for its unusual take on Cold War tensions and its early use of artificial intelligence as a plot device (movies like ‘Terminator’ and ‘The Matrix’ owe an unmistakable debt to Ellison). In spite of (or perhaps because of) its gruesomeness and pessimism, “I Have No Mouth and I Must Scream” remains one of the twelve most reprinted short stories in the English language.

The Sheep Look Up
by John Brunner

Obscure by today’s standards, John Brunner was a groovtastically popular 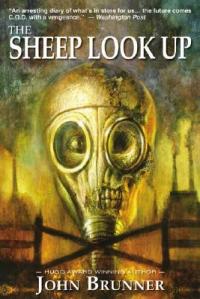 writer in the seventies, where many of his ideas paralleled those of noted futurist Alvin Toffler. The Sheep Look Up has been lauded for the way it accurately predicted the future to come. Though wrong on some accounts, the novel’s depiction of earth’s future seems eerily prescient. The world of The Sheep Look Up is not quite post-apocalyptic, but a reckoning is clear on the horizon. Problems the inhabitants of future earth have (the future being 2007 in this novel,) include ecological disasters on a macroscopic scale, a cash-poor and increasingly stratified society, crumbling infrastructure and generally awful leadership. The real disaster in the novel is none of these issues, of course, but the tragic inability of society to divert its course away from guaranteed destruction, and Brunner takes much joy in pointing out the petty hypocrisies of those who pay lip service to a better world but refuse to take action, or those who would manipulate the good will of others to their own selfish ends. Like the protagonist of The Sheep Look Up, Brunner himself died profoundly disillusioned with civilization.

th the psychic fallout of a large scale disaster and the idea of modern life itself as a disaster of some magnitude. Though several plotlines interweave, one of the major events in the novel is an ‘airborne toxic event’ spreading over the protagonist’s hometown, forcing him and his family to deal with the possibility of death. Throughout the book it is made clear the disaster is not going away, and it becomes something the characters must deal with continually in their lives. Several solutions are floated to assist with this new way of living, most notably a simulated evacuation (where no one actually leaves the event zone) and a powerful drug that cancels out the subject’s fear of death. People facing disasters today would be lucky for such stopgap and absurd solutions, facing realities boggling to all but the most obtuse of postmodernists.