The world passing through the bookstore as it does, its symphony of languages inspires the education of one’s ear.  Starting us off in this New Year, three lovely women turned up speaking something beautifully musical. 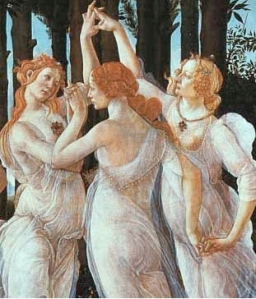 Softer than French…Italian?  No, too many “th” sounds.  Castilian Spanish?  Very, very close…but not quite right.  I’ve heard those “th” sounds somewhere. Greek singer Haris Alexiou springs into my mind. Could it be? I finally hazard asking them, but with a hesitation that impels them to jump in, so it happens that all four of us simultaneously exclaim Greek? Greek!!!. I’m so pleased with the success of my faintly educated guess that I give an involuntary hop and squeak of delight, which makes them laugh…so appropriate of The Three Graces – Euphrosyne (Mirth), Thalia (Good Cheer), and Aglaia (Splendor) – the Greek goddesses who brought joy and goodwill to both gods and mortals.

These traveling three were plenty mirthful and cheery, and splendid in their accomplishments – architecture, medicine, and engineering –  girlhood friends who had carved time out from their professions to grab a vacation in Los Angeles.  Here at the bookstore they were on the hunt for things they couldn’t find at home. Thalia wanted Syliva Plath’s Collected Poems.  Aglaia 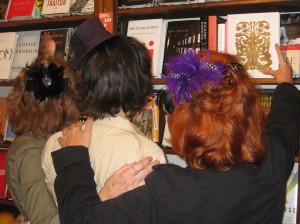 seized upon California cool: Modernism Reborn by Russell Abraham and was thrilled when we pointed her to a shop in Santa Monica specializing in architecture titles. Euphrosyne just wanted to play, piling on our “lets-go-clubbing” hair ornaments. Having actual Greeks at hand I hazarded another question: “How are folks there handling the government’s economic meltdown…have they capitulated to severe belt-tightening?”  Not quite yet, they say. Well, no critter willingly steps back from fatter times. We are looking into our own budgetary abyss, equally unwillingly.  Just the right moment for the three graces to show up and start us out on the right foot…”Frame thy mind to mirth and merriment, which bars a thousand harms, and lengthens life.” Shakespeare isn’t nearly so ancient as they are, but the quote serves.  We at the bookstore are taking this to heart and are likely to hop and squeak with delight at whatever language you bring us, spreading mirth, barring harms, and lengthening life!

Note on a Theme from Aida:

We are making some exciting changes at the very same bookstore of which Jane speaks. Expanding the magic, if you will.  Also, in the interest of spreading mirth, our 50% Off Red Dot sale is still going strong!

Filed under The Other Day at Portrait...