The First Lady Said So

A Happy Birthday to the late Theodor Geisel, known affectionately by us all as Dr. Seuss!

on this day, a day for brain feeding

a plain old day in every other way

except for the needing, the desperate, desperate needing

for a time set aside to be reading.

I’m very much past pleading, as you can well see,

a cozy corner with a book, reading, is where you should be!

fic to the cafe’s back garden, the bookstore seldom has a library hush.  Nonetheless, there are customers whose desire for quiet, undisturbed browsing is such that they manage to make themselves nearly invisible to the passing show.  Having crossed into a serene and silent parallel universe, they become hard to focus on.  The still deer whose small movement momentarily reveals it among the dappled leaves/books.

One of those was in the other day. Slipped in under cover of a happily chattering group of girls trying on rings from the Bling Boxes on the counter.  Didn’t notice him at first, of course. White shirt in background. Paperback fiction section? Girls flock out. Dark slacks…I think that was poetry. A regular stocks up on Birthday cards.  Slender, dark hair.  Hardcover fiction.  Harmonica-buying mom leaves with delighted child and the floor clears now. 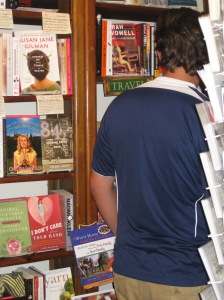 His back is to me in Non-fiction.  It comes to me that he has been methodically working all the shelves. He reaches up to a top shelf to put a book back, and as his arm comes down he lets out a profound sigh.  “Give him privacy.” I think, even as the force of his sigh pulls the words out of me…”What was that?”  He turns to face me.  I’m relieved that he doesn’t seem burdened by my question.  “What..that sigh?”  He puts his elbows on the counter, then surprises me by dropping his face into his hands for a moment…but when he looks back up his expression is musing rather than shadowed.  “I used to read a lot, but haven’t for years now”, he says.  He looks back at the shelves: “So much has passed by.  I feel so behind.”  Well, I say….you don’t have to catch up.  Just jump into the stream.  He thinks about that for a moment and then out comes the Universal Obstacle…”There’s so little time!”  His aura was of commitment to something consuming, and so this slow dance with our stock was his stolen moment to rendezvous with a set-aside part of himself.

After he left, I glanced up to see which book had finally prompted the

Well, of course.  The greatest of all American dissertations on a simple life in direct communion with nature.

Note: No, most of us are not color blind.

Filed under Bits and Bobs, The Other Day at Portrait...