a bit of whimsy and some coincidence

One of the best things about working in a bookstore like ours is that it’s a place where surprises occur, serendipity happens, you read a book about a culture you previously knew nothing about and all of a sudden you’re in conversation with someone seemingly right out of the book… It’s amazing, really.

It was one of those quiet, chilly nights here at the bookstore.  I looked up to see an elderly couple coming through the door from the cafe.  The gentleman had on a grandpa sweater with no idea that it is considered a fashion item among young women today.  He wore his sweater with disregard for anything but its warmth and coziness, and it looked as if it had served him well for many years.  They both had an air about them that brought to mind farms and countrysides in a time gone by.  I greeted them and he nodded and she smiled a smile that warmed the entire bookstore. I watched as she examined many of our pretty antiques and then her eyes found our little silver vases.  She called her husband over and spoke excitedly in a language I couldn’t place. She showed him the vases, and there was more conversation and nodding, and shrugging on his part. 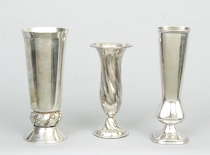 Soon they were both at the counter, with five of the vases, and she said to me, “Which do you like best?”  We discussed where it was going to be placed in her house and what she would be using it for, as a bud vase or just decoration.  She assessed the height of each vase and then pointed to one and said, “Perhaps this one is too serious, a small vase should not take itself so seriously. And this one,”  she pointed to another, “is perhaps too fragile-looking.  I like things to be sturdy, right?” She winked at me.  She held a third vase in her hand.  “Now this one, I believe it to have whimsy, I think whimsy is a good thing in a vase, don’t you?”  Her husband and I agreed.

At this point I was completely charmed by them and asked where they were from and if they were visiting L.A.  She said, “Romania.  Do you know Romania?”  I said I had never been there, nor had I ever met anyone from there… but I am currently enamored with literature from Eastern Europe and ho

w cool that you’re here! She laughed and said, “Well, now you know a couple of Romanians!”  I said, “If all Romanians are as nice as you are I will definitely have to visit that country.”   She blushed a bit at the compliment. They continued to discuss the pros and cons of each vase and then their conversation drifted to their grandchildren.  They were in Los Angeles to visit their three grandchildren and were thinking of moving here to be close to them, as they miss them so much when back home. She asked if I had any grandchildren, and as they paid for two vases that were deemed to have enough whimsy, she added,  “Children and grandchildren are the money we have. That money is better than money.”  I thought about it for a minute and told her she was absolutely right.

Two of my favorites:

The Lazarus Project by Aleksandar Hemon, is a National Book Award Finalist.  It tells parallel stories, one based on true events of the murder in Chicago in 1908 of an immigrant, Lazurus Averbuch from Eastern Europe.  The other is a contemporary story of a writer named Brik, also from Eastern Europe, who decides to write about Lazurus and travels to Sarajevo with his friend Rora to do “research”. The writing is original and extraordinary.

The Cellist of Sarajevo by Steven Galloway is a novel based on true events. During the siege of Sarajevo a cellist plays everyday on a street where twenty two people were killed in a mortar attack.  It is his way of commemorating the killings. Inspite of the danger, he plays at the same time everyday.  He is the link in the story between other survivors and snipers in a city under siege. Extraordinary book, as well.

Filed under Book Recommendations, The Other Day at Portrait...